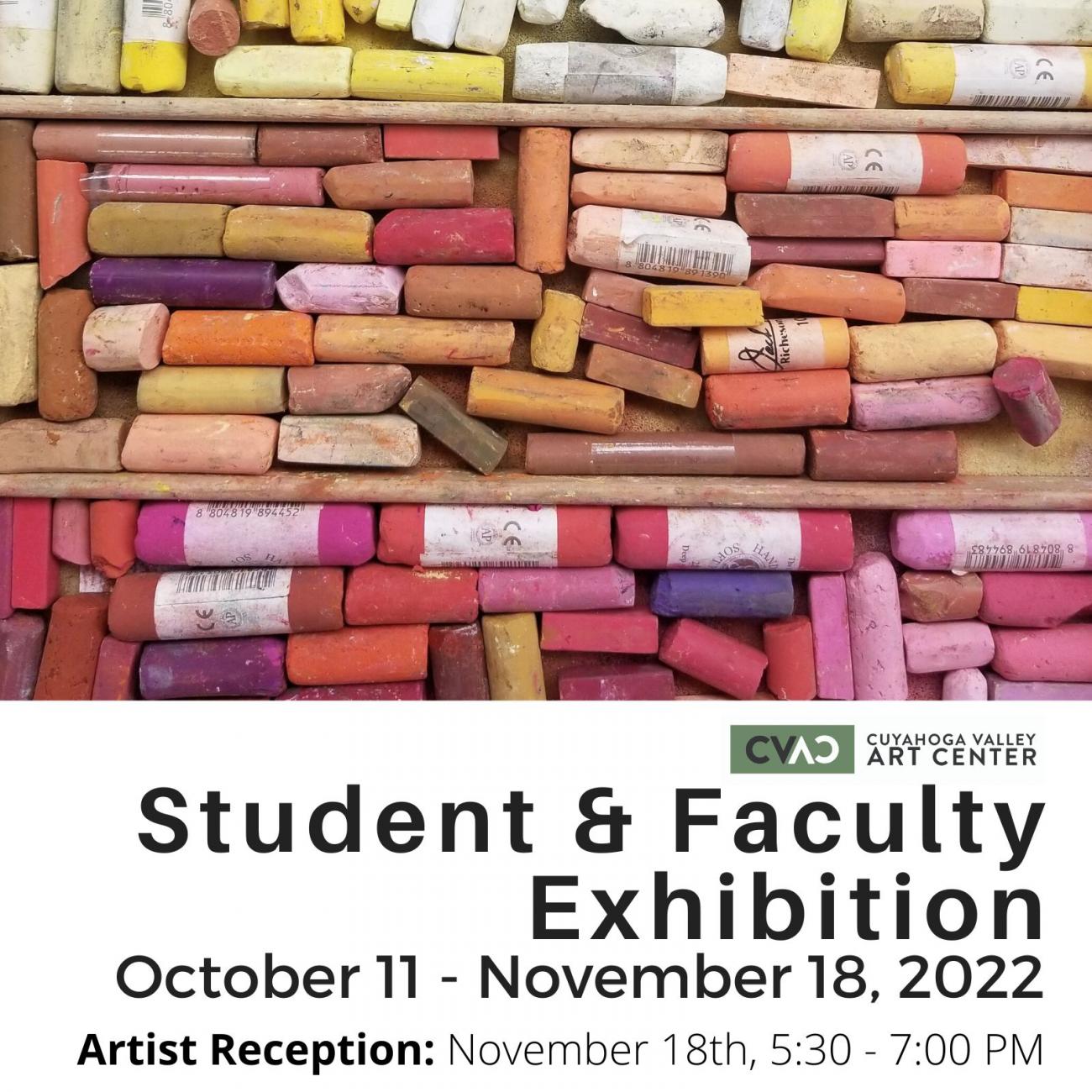 The Cuyahoga Valley Art Center (CVAC) is showcasing the talents of participating artists who took a class or workshop at CVAC in 2021 or 2022. Starting October 11th, This popular annual exhibition will kick off a People’s Choice selection process that shall determine two winners. Each winner shall receive a $50 cash prize supported by the Vijay Rastogi Memorial Fund. Participating faculty members selected up to 2 honorable mentions from participating students.

Winners will be announced and celebrated at the Artist Reception to be held on November 18th 5:30 -7:00 PM. Participants are encouraged to invite their family and friends to this event to celebrate their artistic journey. Participants may take their artwork home at the conclusion of this reception.

The mission of the Cuyahoga Valley Art Center is to promote active interest, involvement and strengthened appreciation of fine and applied arts within a supportive community for individuals of all ages. It fulfills its mission by being a resource for the arts community with a large gallery, extensive classes in a variety of media, workshops conducted by renowned artists, a variety of competitive exhibitions, and a friendly place for artists of all levels to develop.

The Cuyahoga Valley Art Center was founded November 19, 1934 under the name of The Arts and Craft Club. The original meeting place was on Cook Street in Cuyahoga Falls, Ohio, where the first painting class was held. In 1936, we became the Falls Institute and had outgrown the Cook Street location. In March 1937, we relocated to the Apollo Building on the corner of Front Street and Portage Trail and in February 1939 relocated, again, to the Plum Building on Portage Trail.

In the 1940’s, we were known as The Art and Study League, again relocating, to the Schoner Building, and changing our name several times. In 1945, the name was changed to the Falls Civic Art Center and in 1946 moved to North Front Street and changed names, once again, to the Falls Art Center.

In 1956, we incorporated and received non-profit 501(c)(3) status. Another move and name change came in 1959, moving to the second floor at 1886 Front Street and becoming the Cuyahoga Falls Art Center. At this time Patsy Sigler was elected as the first President. The center continued to grow and serve the artist community and the public.
In 1987, operating under our current name, Cuyahoga Valley Art Center, we purchased the building at 2131 Front Street in Cuyahoga Falls which continues to be our home today. For more than three decades, the Women’s Auxiliary Board has provided essential financial support for the center.

In 2000, in response to the organization’s growth and increased services to its members and the community, Cuyahoga Valley Art Center hired its first director, Linda Nye, who served in that position until 2015. Our current Director is Danielle Dieterich.

Cuyahoga Valley Art Center
2131 Front Street
Cuyahoga Falls, Ohio 44221
(330) 928-8092
Did you know you can follow any of our 175 Special Interest calendars and stay informed better than ever before? See them here. You can also create your own public or private calendar here. Post events to your calendar and ours at the same time! Terms and conditions may vary based on the policies of your local Town Planner publisher.