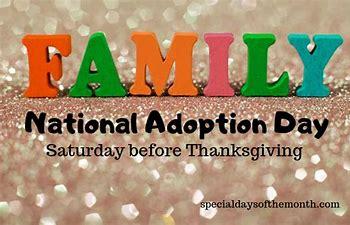 Observed every year on the Saturday before Thanksgiving, National Adoption Day is a holiday in which communities and courts all over the U.S come together to finalize the adoptions of thousands of children who are in foster care. Every year, hundreds of events are held, in just about every part of the United States, and they are all designed to finalize the adoptions of children in foster care. in 2015, over 4,000 children were adopted on this day, and over 58,000 children in total have been adopted since its inception in 2000. In the U.S., there are over 125,000 children waiting to be adopted, and the number increases every year, so this is the perfect day to spread the word about that fact and help these children get adopted. When is National Adoption Day? This year (2021) November 20 (Saturday) Next year (2022) November 19 (Saturday) Last year (2020) November 21 (Saturday) History of National Adoption Day Started by a coalition of groups which include the Children’s Action Network, The Dave Thomas Foundation for Adoption, The Alliance for Children’s Rights, and the Freddie Mac Foundation, National Adoption Day became a reality in November of 2000. Over the years, sponsors of this day have worked with various state foster care agencies, law firms, courts, and child advocates to complete foster care applications. By 2003, over 120 jurisdictions participated in adopting over 3,000 children. In 2011, over 300 events were organized. Overall, over 58,000 children, as of 2016, have been adopted on this holiday. Despite the challenges imposed by the COVID-19 pandemic in 2020, over 75,000 children have been adopted thanks to events thrown on this holiday. Facts About Adoptions & The Adoption Process We’ve learned quite a few things about adoption and the adoption process as we did the research on this holiday. Facts that we think everyone can benefit from learning about, so we decided to list some of them below. Adoption In The U.S Has Existed For Over 171+ Years Adoption as an official and legal process has existed in the United States for almost two hundred years. It was first implemented in the U.S in 1850. One Out Of Twenty-Five U.S Families Have At Least One Adopted Child Every single year, there are approximately 135,000 children are adopted in the United States. That means that 1 out of 25 families in this country have at least one adopted child. However, this only accounts for domestic adoptions and doesn’t take into account the 7,000 foreign adoptions that happen every year.