National Save the Eagles Day 🦅

National Save the Eagles Day 🦅 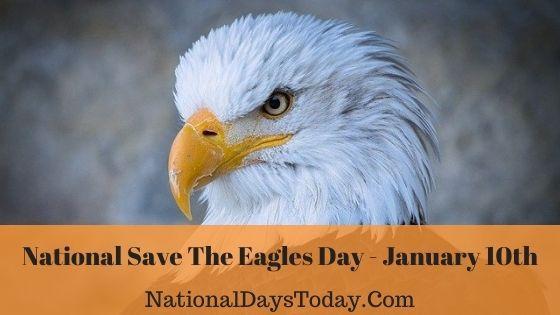 More About National Save the Eagles Day 🦅

Hailing from the Accipitridae bird family, eagles are known as the king of birds. There are over 60 species of eagles across Africa and Eurasia of which only two species are found in the US and Canada and 12 species across other continents. While the human race has eternally envied birds in the air but an eagle’s flight is a different spectacle altogether. With a wingspan of 6-7 feet, they can be seen elegantly soaring high into the sky, often up to 10,000 feet. On long flights, they sparsely flap their wings as they smoothly glide, taking advantage of the air currents and the thermal variations. Eagles are predators as well as scavengers. They have large beaks that grow throughout their life, strong talons, and powerful legs that serve well when they go hunting. An eagle is capable of breaking your arm with their excellent hunting skills. Their visual acuity is triple that of humans as they possess large pupils which minimize the scattering of light. Hence they can spot their prey from afar. An eagle’s abode is set high on tall trees or mountain cliffs known as eyries. They lay only two-four eggs among which only the fittest survive. The elder chicks are known to kill the younger chicks with no interference from the parent eagles. Since the female chick is larger, they tend to be the alpha eagles. These strong and mighty birds gained so much admiration that many songs, football clubs, and popular symbols have been associated with these birds and their traits. The bald eagle was declared as the official emblem of America in 1787. According to president John F Kennedy, the strength, independence, and beauty of this eagle were symbolic of all that America stood for. Nature has bestowed its best features on these birds, that fall on the top of the food chain. These powerful birds of prey that dominate the avian kingdom have been rendered helpless by mankind, who usurped their habitats. Well, habitat loss is just the tip of the iceberg! Pesticides such as DDT entered the food chain and eagles being one of the apex predators were severely affected. It weakened the eggshells, which cracked before the chick could hatch. The lead contaminants that remained from hunting entrails, scavenged by eagles, collisions with power lines, and the poisoning of eagles who were considered as a threat to the livestock were some of the factors that led to the decline of the bald eagle population. As a result, they were listed as endangered species during the years 1967 to 1995. Thanks to the efforts of the scientists, activists, and volunteers, they were listed in the “least concern” category by 2007. Ironically, the emblem of America, a representation of freedom and strength has been restricted and weakened by our ignorance and greed. We must be part of the collective efforts and measures taken by the government to help save these majestic birds. It would be a shame to see them only on the passport covers and currency notes. Save eagles, save our pride!