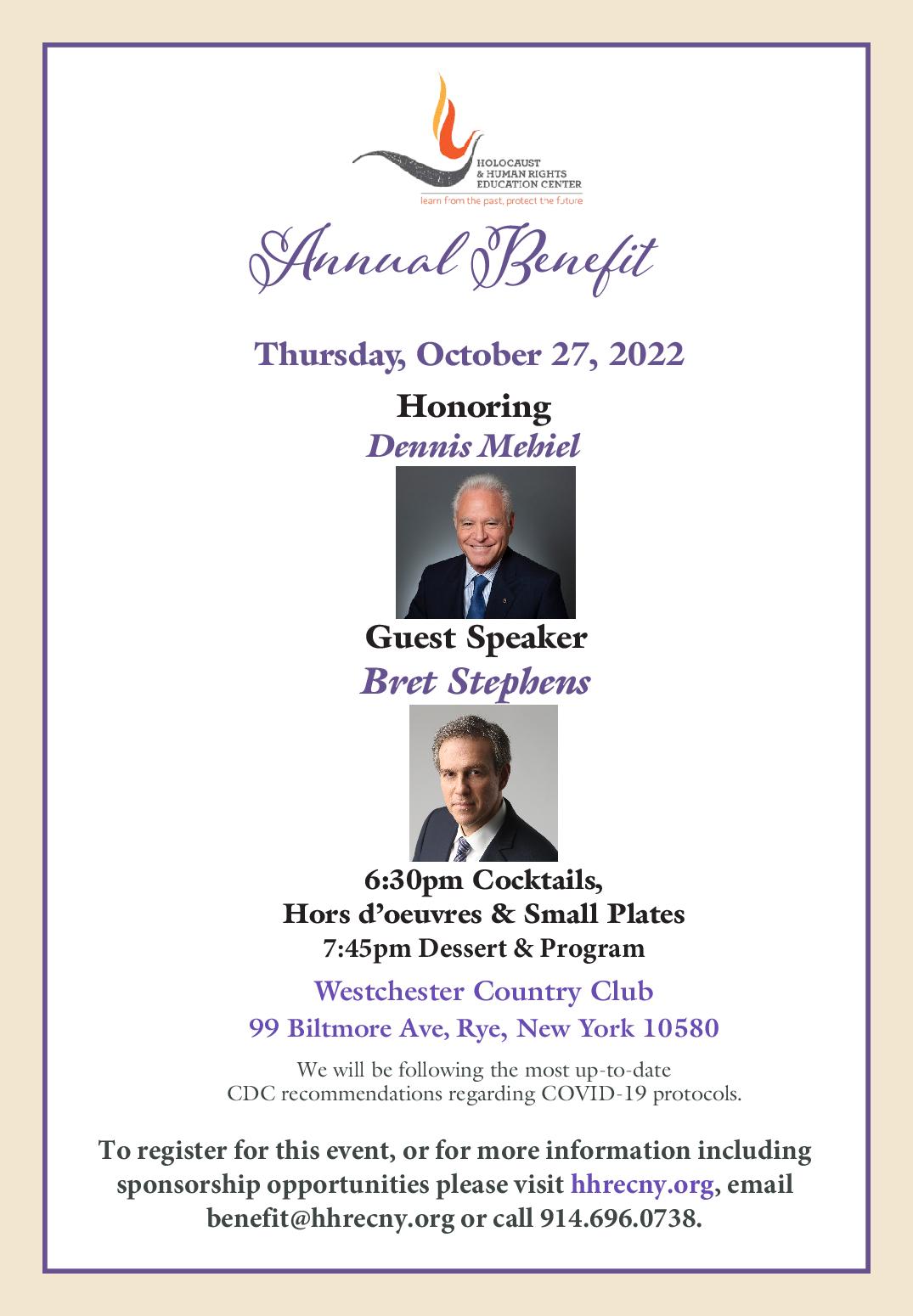 The Holocaust & Human Rights Education Center will honor Dennis Mehiel at their annual benefit on October 27 at 6:30 at the Westchester Country Club in Rye, N.Y. Bret Stephens will be the keynote speaker.

Dennis Mehiel, formerly a twenty-year Westchester County resident, is the Managing Member of Four M Investments, LLC, headquartered in White Plains. Four M is a Private Investment Firm that manages only family funds, focused on early-stage technology, food service and corrugated packaging. He is the Chairman and CEO of Delmarva Corrugated Packaging, Inc.

Mr. Mehiel served for 12 years as a member of the Democratic National Committee, is a former Chairman of the Westchester Democratic Committee, was an Officer and Director of the New York League of Conservation Voters, and was the New York State Chair of the Kerry Presidential Campaign in 2004.

From 1989 until 1993 he was a Trustee of the Windward School in White Plains, one of the region’s premier providers of education for learning disabled children. He served ten years as a Trustee of the Purnell School in Pottersville, N.J., an independent high school for girls who have not succeeded in a traditional competitive academic setting. Mr. Mehiel was the first person not of the Jewish faith ever to be elected to the Board of Governors of Yeshiva University’s Wurzweiler School of Social Work.

Bret Stephens joined The New York Times as an Op-Ed columnist in April 2017. Mr. Stephens came to The Times after a long career with The Wall Street Journal, where he was most recently deputy editorial page editor in charge of international opinion and, for 11 years, the paper’s principal foreign-affairs columnist. Before that, he was editor-in-chief of The Jerusalem Post. He has reported around the world and interviewed scores of world leaders.

Mr. Stephens is the author of “America in Retreat: The New Isolationism and the Coming Global Disorder,” released in November 2014. He is the recipient of numerous awards and distinctions, including three honorary doctorates, the Ellis Island Medal of Honor, and the 2013 Pulitzer Prize for commentary.

He was raised in Mexico City and holds a B.A. from the University of Chicago and a MSc. From the London School of Economics.

The Holocaust & Human Rights Education Center will follow the most up-to-date CDC recommendations regarding COVID-19 protocols.