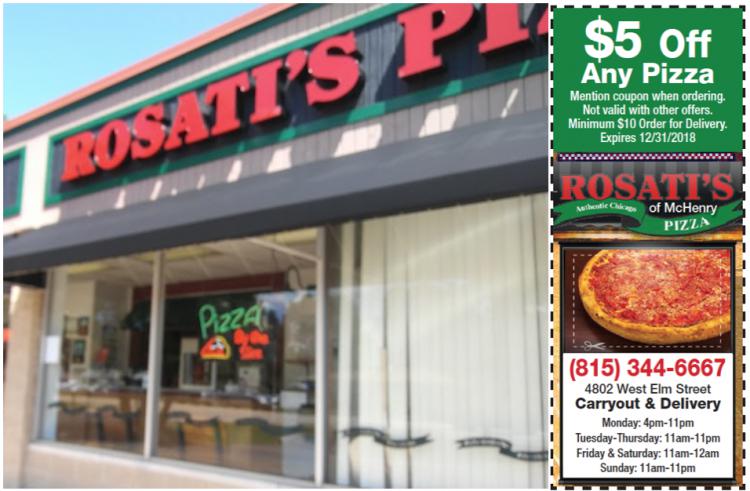 Mention Coupon when Ordering. Not valid with other offers. $25 minimum order for delivery orders.

Cashier: Scanning the QR code with a mobile device is not required for redemption but it will provide additional validation.

Mention Coupon when Ordering. Not valid with other offers. $25 minimum order for delivery orders.

Cashier: Scanning the QR code with a mobile device is not required for redemption but it will provide additional validation.

DESCRIPTION
In 1895, an Italian immigrant from the region of Naples, Italy, Ferdinand Rosati opened a fine-dining Italian restaurant on Coney Island. In 1906, he moved to Chicago and started yet another Italian restaurant on Chicago’s famous Taylor Street. Since the restaurant gained immense success, expansion was the next direction. A hotel, saloon, and a small importing and exporting business of Italian foods were added to the restaurant. Back then, pizza was strictly old-world Italian fare, simply a tomato sauce served on crisp bread that Ferdinand often put on the table as a special offering to his customers and boy did the people love it!

By 1927, Ferdinand’s son, Saverio Rosati opened another restaurant on Pulaski and Madison in Chicago, right next to the Marbro Theater. Soon after, the restaurant became a favorite watering hole for the old Chicago society and Windy City politicians. On any given night you might spot Jack Haley, famous for his role as the “Tin Man” in The Wizard of Oz enjoying a hearty helping of Saverio’s homemade Italian specialties or contrary to popular belief, notorious gangster, Al Capone and his entourage could be spotted sharing a heaping dish of pasta with his so called “nemesis”, Eliot Ness.

When Saverio (Sam) retired, his sons moved to the suburbs with a new and timely concept. The year was 1964 and pizza was now a popular trend. Saverio’s sons Dick, Ron and Al Rosati opened the first Rosati’s Pizza in an Illinois suburb, Mount Prospect. By 1978, a total of ten Rosati family members owned carryout pizzerias.

Now with the Rosati name firmly established in the Chicago suburbs, the family took another giant leap and started franchising their Rosati’s Pizza restaurants.

Today, we are honored to say the Rosati’s brand is approaching 200 restaurants nationally. Including the newest concept, the Rosati’s Pizza Pub. Great-grandpa would be so proud!

Shouldn't YOUR coupon be on TownPlanner.com?

Did you know that independent surveys by the Verafast Corporation show that at least 70% of homeowners who receive our beautiful full color wall calendar keep it and display it all year long? Can you think of any other advertising medium that has such an excellent retention rate?

The secret is that our calendar is so much more than an advertising flyer. It's a full size calendar loaded with beautiful hometown photography, lots of events and fun things to do around town, school closings and recycling schedules, and coupons and money saving offers from the local businesses you want to patronize! The result is that we can offer you an advertising medium that homeowners actually want to receive. They continue to request it all year long -- some even offer to pay! Can you name any other advertising medium that your target audience is willing to pay for? Let the Power of the Planner work for you!

We have a number of advertising options to fit every budget, tailored to the needs of your individual business or organization. Would you like to know more? Please read some our our satisfied sponsor testimonials from businesses like yours, or contact your Town Planner publisher today.

Remember: when you place an ad with the Town Planner, it doesn't go in the trash. It goes up in offices, on refrigerators, in work spaces, on bulletin boards, where families can see it and refer to it every day. We really do put your business On Display Every Day: 24 hours a day, 7 days a week, 365 days a year.

The Town Planner is a great way for independent-minded ambitious individuals to earn a living while calling the shots as the owner of their own business. Not only that, but you'll also be supporting local businesses and keeping your community informed and entertained. If this sounds like a promising opportunity for you or someone you know, please take a look at our franchise page!