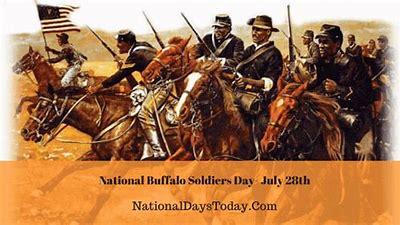 National Veterans Memorial and Museum logo STORIES EXHIBITIONS FACILITY RENTAL EMAIL SIGNUP TICKETS DONATE Visit Events & Programs Members Education Support About WED-SUN 10 A.M. - 5 P.M. HOME / PRESS ROOM / BLOG / BUFFALO SOLDIERS DAY: JULY 28 Buffalo Soldiers Day: July 28 July 21, 2020 Buffalo Soldiers Day on July 28 commemorates the formation of the first regular Army regiments comprised of African American soldiers on September 21, 1866, seventeen months after the end of the Civil War. Established by Congress, these regiments were the first peacetime, all-black regiments in the regular U.S. Army. The origin of the term “Buffalo Soldiers” has a unique history that is much debated. Various sources say the name originated with Cheyenne Native American warriors, while others say the name originated with the Comanche tribe. The Apache used the term because the soldiers had curly hair like bison. Yet another source recalls the Plain Indians using “Buffalo Soldiers” due to the coats they wore during the winter. No matter how the soldiers earned the name, they were committed to serving the country and sought to become a part of the great legacy of the United States Army. Henry O. Flipper was the first African American commissioned officer to lead the Buffalo Soldiers. Born into slavery in 1856 Flipper was also the first African American to graduate from the United States Military Academy at West Point. He earned a commission as a 2nd Lt. in the Army. Under President Bill Clinton, Flipper was posthumously pardoned in 1999 after a review of an “unduly harsh and unjust” court-martial and dismissal from the Army. The 9th and 10th Cavalry plus the 24th and 25th Infantry participated in winning dozens of battles large and small against ‘hostile’ Native Americans who wanted to leave the reservation during the Indian Wars. For example, Troops H and I of the 10th Cavalry fought so gallantly against hundreds of Natives at the Battle of Beaver Creek that they were thanked in a Field Order by General Philip Sheridan. By 1880, the Buffalo Soldiers had minimized Native resistance in Texas, Oklahoma, and Montana. They built and/or served at Fort Sill in Oklahoma and Fort Huachuca in Arizona. The soldiers served gallantly in Cuba with Teddy Roosevelt and the Rough Riders in the Battle of San Juan Hill in 1898 and the Philippines in the early 1900s The Buffalo Soldiers also protected some of our National Parks such as Yosemite from wildfires and thieves. They served as park rangers in the Sierra Nevada during the summer and were housed in the Presidio Army Post in San Francisco during the winter. During WWI, the Buffalo Soldiers were relegated to defending the Mexican border. They trained for overseas deployment and combat in WWII but were deactivated in 1944. In 1948, President Harry Truman issued an executive order eliminating racial segregation in the armed forces. The Buffalo Soldiers are American Veterans who served our country with distinction and honor. They had the lowest military desertion and court-martial rates of their time. Many earned the Congressional Medal of Honor, an award presented in recognition of combat valor which goes above and beyond the call of duty. Learn about Charles Young, perhaps the most famous of the Buffalo Soldiers and the National Monument located near Wilberforce, Ohio, here. To learn more about the Buffalo Soldiers visit: Click for Details.