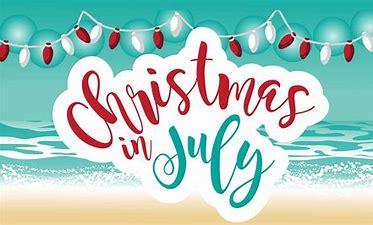 More About Christmas in July 🎄🎅🏻

Christmas in July or Christmas in Summer is a second Christmas celebration held around the summer season, mainly during July. It is centered around Christmas-themed activities and entertainment, including small gatherings, seasonal music and specials, and shopping, with the goal of getting the public in the "Christmas spirit" during the summer season in the Northern hemisphere. Christmas in July is usually recognized as July 25th but also sometimes celebrated on July 12th. The earliest reference to something Christmas in July comes from Yellowstone National Park. It is said that at some point in the first few decades of the 20th century, an unexpected blizzard stranded travelers at one of the park’s inns. Snowed in, the group decided to celebrate Christmas. The lack of available details about this supposed occurrence and the fact that there’s no record of a summer snowfall at Yellowstone large enough to trap people indoors in the early 20th century suggest strongly that it probably never happened. Another claim to the holiday comes from Keystone Camp. A short item in the Washington Post in November 1933 titled “Summer Santa Fun, Says Camp Head” outlines how Fannie Holt presented Christmas in July to the girls at her camp. “There’s no reason for having Christmas in July except that it’s fun! And the girls loved it,” the article quotes Holt as saying. Though it’s impossible to definitively say what the real origin of Christmas in July is, there were no major media mentions of the idea before 1933, which bolsters the claim of Keystone. The term was given national attention with the release of the Hollywood movie comedy Christmas in July in 1940, written and directed by Preston Sturges. In the story, a man is fooled into believing he has won $25,000 in an advertising slogan contest. He buys presents for family, friends, and neighbors, and proposes marriage to his girlfriend. The idea of Christmas in July was then used as a way of promoting the idea of sending Christmas gifts early to GIs serving overseas during world war two. Every July, the television home shopping channel QVC has Christmas in July sales, mostly decor and early gift ideas for children. Since 2012, the Hallmark Channel has piggy-backed on the massive success of its annual Countdown to Christmas programming event by launching Christmas in July, giving its devoted fanbase yet another month filled with holiday cheer and irresistibly cheesy movies. Similar Observances Read more about SKYWARN Recognition Day4 Dec SKYWARN Recognition Day Seasons USA Skywarn is a program of the National Weather Service. Its mission is to collect reports of localized severe weather in the United States. READ MORE Read more about National Thank God It’s Monday Day3 Jan National Thank God It’s Monday Day Seasons USA Find out the dates, history and traditions of National Thank God It’s Monday Day READ MORE Read more about National May Ray Day19 May National May Ray Day Seasons USA Find out the dates, history and traditions of National May Ray Day READ MORE Read more about National Daylight Appreciation Day21 Jun National Daylight Appreciation Day Seasons USA Find out the dates, history and traditions of National Daylight Appreciation Day READ MORE EXPLORE MORE SEASONS HOLIDAYS Other Observances on July 25th 2022 Read more about National Culinarian’s Day National Culinarian’s Day Occupation USA How our food is presented is an important part of how much we enjoy it, so let's use today to appreciate the unseen staff who cook and plate up for us in restaurants. READ MORE Read more about National Hot Fudge Sundae Day National Hot Fudge Sundae Day Food USA Find out the dates, history and traditions of National Hot Fudge Sundae Day READ MORE Read more about National Merry-Go-Round Day National Merry-Go-Round Day Culture USA Find out the dates, history and traditions of National Merry-Go-Round Day READ MORE Read more about National Threading the Needle Day National Threading the Needle Day Environment USA Some people may not see the point of this holiday, which will make it even harder to thread the needle! READ MORE ALL EVENTS ON JULY 25TH 2022 Translate this page Select Language Powered by Google TranslateTranslate There is a Day for That! Your Home for the Holidays. Office Holidays Ltd. Unit 10, Homelands Commercial Centre, Vale Road, Bishops Cleeve, UK GL52 8PX Company Reg. No. 9187434 Links About Feedback Other sites Office Holidays Holiday Recipes Office Holiday Blog Public Holiday News © 2021 by Office Holidays Ltd.. All rights reserved. Terms of Use / Privacy Policy info@officeholidays.com