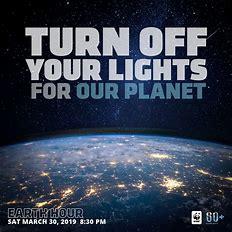 In 2004, worried by scientific findings, Australia’s World Wide Fund for Nature met with an advertising agency in Sydney to “discuss ideas for engaging Australians on the issue of climate change”. Together, they coined the idea of a large scale switch off in 2006 and called it “The Big Flick” and decided to make their idea reality. The mayor of Sydney was quickly convinced of the importance of raising awareness about the amount of electricity being used and how that affected the planet, and the first ever Earth Hour was held on March 31 in Sydney, Australia at 7:30 pm. Soon, the idea began to spread, with San Francisco being the next major city to run a “Lights Out” program in October 2007. The event was an enormous success and received lots of positive media coverage, and by 2008, 35 countries in the world were participating on all seven continents. Between 8 and 9 pm, hundreds of cities in these 35 countries turned off their lights. Even some of the most famous landmarks participated, including the Sydney Opera House (Sydney, Australia), Empire State Building (New York City), National Monument (Jakarta, Indonesia), Golden Gate Bridge (San Francisco, US), Table Mountain (Cape Town, South Africa), the Colosseum (Rome, Italy), Azrieli Center (Tel Aviv, Israel), Royal Castle (Stockholm, Sweden), the CN Tower (Toronto, Canada), SM Science Discovery Center (Manila, Philippines), Petronas Towers (Kuala Lumpur, Malaysia), KL Tower (Kuala Lumpur, Malaysia), Wat Arun Temple (Bangkok, Thailand), The London City Hall (London, England), and others. In 2016, the number of countries participating grew to 170. Many celebrities have expressed their support for the event, including Lionel Messi, Al Gore, Yoko Ono and Nelson Mandela.