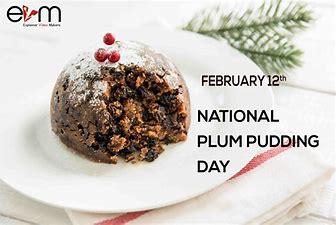 Plum Pudding Day is dedicated to a mouthwatering treat that, surprisingly enough, contains no plums! This seems to be related to the fact that, back in the 17th century when the dish was first created, plums were referred to as raisins, currants, figs or any other type of dried fruits. Also, those who are American won’t really find it to be what they think of as pudding either. It’s actually more of a cake that is boiled (not baked). Nevertheless, it is called “plum pudding”, in the British tradition of ‘pudding’ which includes desserts of many different types. Plum pudding (aka Christmas pudding or figgy pudding) is a steamed or boiled pudding–really more like a cake–that is usually served during the holiday season around Christmas and New Year’s Day. This is another interesting fact, considering that its day of celebration lands several weeks after these holidays. It seems that this day is already filled with many unique and interesting things! Plum pudding is made up of nutmeg, raisins, nuts, apples, cinnamon, dates, and many other ingredients. In England, it is tradition to have every person in a household simultaneously hold onto the wooden spoon together to help stir the batter. As they stir it they also have to make a wish! Dating back to some time in 15th century England, plum pudding was originally referred to as ‘plum pottage’. This started out as a savory dish that was filled with root vegetables as well as meat. It was served at the beginning of the meal (not the end, like a dessert), but eventually made its way from savory to sweet. Some of the puddings were made many months in advance and then set aside to mature until it was eaten on Christmas Day. By the mid-1600s, plum pudding was so associated with Christmas that it was banned by Puritan powers such as Oliver Cromwell but was quickly restored a decade or so later when the Puritans lost their power. Charles Dickens, Anthony Trollope and other Victorians of influence had a lot to do with making plum pudding and Christmas pudding a central figure in their holiday celebrations. Since then, Plum Pudding Day has developed as a way to celebrate this delightful icon on a day all its own.