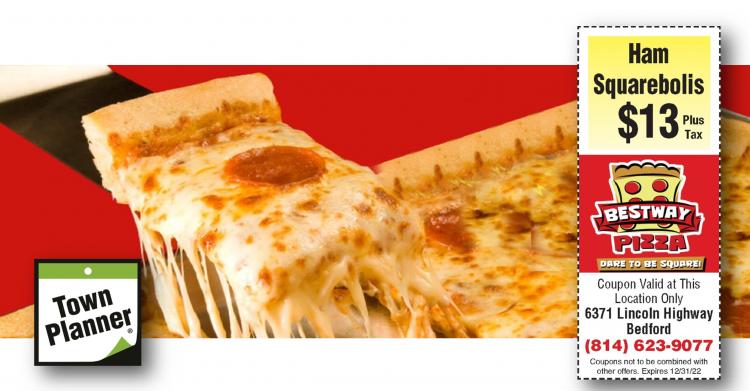 Coupon Valid at6371 Lincoln Highway, Bedford Location Only Coupons not to be combined with other offers. Expires 12/31/22

Coupon Valid at6371 Lincoln Highway, Bedford Location Only Coupons not to be combined with other offers. Expires 12/31/22

he story of our famous square cut pizza begins in the early 1950s in an unlikely place, The Pennsylvania Railroad. Railroad worker, Gene Caparella, dusted off his grandmother’s pizza recipe one day and started bringing it to work. His fellow railroad workers tried it and loved it, and so the foundations of a pizza business started to form. In 1955, Gene was laid off from the railway and seized the opportunity to open his very first shop, which he named Best Way Pizza. Gene continued to operate his pizza shop in various locations around Altoona for 25 years, until his retirement in 1980.
Unhappy with the thought of never having Best Way Pizza again, Mr. Caparella’s friend, long-time customer, and square cut pizza fanatic, Craig LeCrone Sr. purchased the Best Way Pizza business and reopened a store in Hollidaysburg, PA. Craig Sr. kept his job at UPS until 1982, when he decided he liked being square and wanted to open up several more locations throughout the area.
Our original, just faster.
Not content with simply offering square cuts for eat-in or takeout, LeCrone Sr. installed, what is now our iconic feature: the Best Way Drive Thru! Now Best Way Pizza customers can cruise on through and get the fastest, tastiest pizza in no time flat. The first location to gain the drive thru was the 6th Ave Altoona shop in 1986.
Onward and Upward
Keeping it all in the family, Mr. LeCrone’s son, Craig LeCrone Jr. joined the Best Way Pizza team in 1988 and together they’ve worked to build the Best Way Pizza business. With a passion for providing cheesy, square cuts of pizza fast and at affordable prices, the Best Way Pizza brand quickly achieved a mass following and the LeCrone family sold its first franchise in 1991 in Greenwood, Pennsylvania. That store is still cranking out cheesy square cut goodness to this day. Since then, numerous franchise locations have opened throughout Pennsylvania, and we hope to add many more. Right now, there are 10 franchise locations and 2 company owned locations, so you’re never far from a bite to eat at Best Way.
Expanded locations and Expanded Menus
In addition to our traditional and now famous Best Way square cuts, we pride ourselves on offering you the very best pizza, salads, subs and squarebolis. So stop by a location near you, and drive-thru, eat-in, or carry-out and make Best Way Pizza your neighborhood pizza shop.

Shouldn't YOUR coupon be on TownPlanner.com?

Did you know that independent surveys by the Verafast Corporation show that at least 70% of homeowners who receive our beautiful full color wall calendar keep it and display it all year long? Can you think of any other advertising medium that has such an excellent retention rate?

The secret is that our calendar is so much more than an advertising flyer. It's a full size calendar loaded with beautiful hometown photography, lots of events and fun things to do around town, school closings and recycling schedules, and coupons and money saving offers from the local businesses you want to patronize! The result is that we can offer you an advertising medium that homeowners actually want to receive. They continue to request it all year long -- some even offer to pay! Can you name any other advertising medium that your target audience is willing to pay for? Let the Power of the Planner work for you!

We have a number of advertising options to fit every budget, tailored to the needs of your individual business or organization. Would you like to know more? Please read some our our satisfied sponsor testimonials from businesses like yours, or contact your Town Planner publisher today.

Remember: when you place an ad with the Town Planner, it doesn't go in the trash. It goes up in offices, on refrigerators, in work spaces, on bulletin boards, where families can see it and refer to it every day. We really do put your business On Display Every Day: 24 hours a day, 7 days a week, 365 days a year.

The Town Planner is a great way for independent-minded ambitious individuals to earn a living while calling the shots as the owner of their own business. Not only that, but you'll also be supporting local businesses and keeping your community informed and entertained. If this sounds like a promising opportunity for you or someone you know, please take a look at our franchise page!