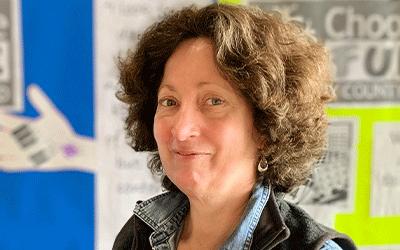 “Your efforts epitomize the role that higher education can and must play in developing dynamic, civically engaged communities across the Mid-Atlantic region and country,” said Madeline Yates, executive director of Transform Mid-Atlantic.

In addition to her instructional duties, McMahon is the faculty director of the College to Community Partnership Center. She joined ACM in 2015.

Twenty-seven students enrolled in McMahon’s Marriage and the Family course, and five students enrolled in Haydel’s American Government course participated in the collaboration last spring, meeting jointly over Zoom each week with UR Action trainers. The participants represented a mix of ages, cultures, genders, social classes, and ethnicities. They learned to engage in constructive dialogue, conduct issue analyses and design solution-focused projects based on their work with community partners.

“I love collaborating with Montgomery College and I know the [ACM] students did, too. The professional support from UR Action was amazing; the students learned so much about interacting with people from diverse backgrounds and they were able to work as a team to accomplish a goal,” McMahon said.

McMahon’s students selected The Pantry, the college’s permanent food and supply pantry, as their community partner. They worked in groups over Zoom and in person with Dione Clark-Trub and Heather Greise, The Pantry’s leaders, and co-chairs of the Student Emergency Support Committee.

McMahon credited Clark-Trub, coordinator of Academic Access and Disability Resources, and Greise, associate professor of Academic Development, for their roles in the collaboration’s success and requested their attendance at the awards ceremony. “They were wonderful and gave their own time to meet with students on Zoom and in person to help them meet their project goals. Being open about [The Pantry’s] challenges and strengths was most impactful for the students,” said McMahon.

Doing Something to Help Others

Working from their group’s determined theory of change, students developed and implemented a number of projects on behalf of The Pantry: a detailed plan for an on-campus community garden to expand the college’s capacity to grow vegetables, an advertising and stigma-removing campaign featuring information tables in high-traffic areas with “grab and go” food and personal supply items, and a recipe book for students featuring healthy recipes from the University of Maryland Extension's SNAP-Ed program, among others.

“I really enjoyed getting the opportunity to work with a different population of students than I typically teach. It was very refreshing to hear the creative ideas they had for how we could continue expanding The Pantry's impact for current and future ACM students,” said Greise, who worked with the group of students who developed the books of healthy recipes.

Clark-Trub worked with the group exploring the potential for campus community gardens. “I loved the enthusiasm for solution-based work that the students displayed,” Clark-Trub said. “They identified several factors that make a campus community garden a less than ideal project (at least for now), but in the process, they identified which steps would need to be taken and other resources in the community that can be utilized to get fresh foods.”

The “Basic Needs Security Collaboration” also accomplished something that every instructor wants – it changed a student’s expectations for the better. As one ACM student confided in McMahon, they thought the class would be “boring” but found it engaging because they were able “to interact with so many people and do something to help others.”

More About Allegany College of Maryland

The mission of the Nurse-Managed Wellness Clinic (NMWC) at Allegany College of Maryland (ACM) is to
provide inter-professional clinical experiences for nursing and allied health students. Additionally the NMWC provides community wellness education, disease prevention and health promotion
services and educates clients to be informed, self-directed consumers of health care.

Allegany College of Maryland
12401 Willowbrook Road SE
Cumberland, Maryland 21502
(301) 784-5670
Did you know you can follow any of our 175 Special Interest calendars and stay informed better than ever before? See them here. You can also create your own public or private calendar here. Post events to your calendar and ours at the same time! Terms and conditions may vary based on the policies of your local Town Planner publisher.